iPads in the Library: Pilot Study and Promotion

Rumors of an iPad pilot study for the library began circulating back in October. Two weeks ago — after months of negotiations, careful planning and adjustments — a bank of 20 iPads were delivered to the library.  Cataloged and all dressed up in matching protective cases, the iPads are now available and awaiting the return of students in September. Librarians from around the country, technology blogs (and a few Geniuses at the SoHo Apple Store) were all big factors in how the iPads ended up being configured. In this post I will walk through some of the decision making processes, conversations and compromises that are all part of the journey of the iPads so far. That being said, the library staff (myself included) hope that the program will continue to evolve with the needs of students and library staff. 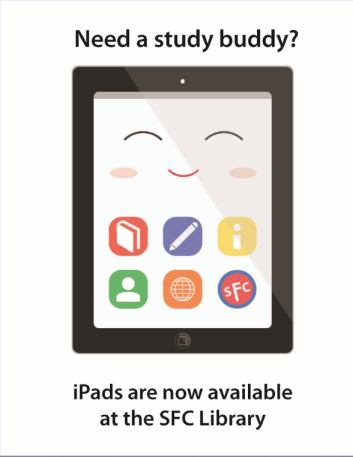 Apps: Making the iPad More Than Just a Screen With A Button

Working closely along side the college’s IT department, it was decided that the iPads should have around 25 apps loaded on to them. The idea of limiting the number of apps was influenced heavily by the amount of time it would take to reconfigure iPads with a greater number of apps. Additionally, staff from across both departments wanted to encourage students to request apps once the iPads were circulating. Each iPad also came with a budget of $50 for apps and cases, which meant that the library staff was very focused on finding quality free apps, and apps that were included along with other subscription services.

There are thousands of free and paid apps available through the Apple Store, so narrowing down the apps that would be included on the iPads first required some thought about what students would be using the devices for. The iPads arrived as part of a grant, so the policies for the iPads had been drafted up before the app planning stage began. Students are only able to borrow the iPads for three hours (no overnight loans) and chargers are not loaned out with the iPads. Due to the short loan period, students would not be encouraged to customize the iPads and would be barred from downloading new apps or accessing their personal Apple IDs. With these restrictions in mind, we still wanted to ensure that students would be able to easily access their online accounts (Facebook, Youtube, Skype, Netflix, etc) and would also be able to do school work and take advantage of the many powerful apps that are exclusive to the iPad and other tablets.

The main activities that were selected were: Social/Fun, Writing/Note Taking, News and apps geared towards departments that require resources that are not easily addressed with print/eprint materials. This last group includes nursing and medical students as well as business majors. Working together, the library staff collected and read through other colleges’ experiences with iPad pilot programs including their suggestions for apps and device configuration. A list of these articles can be found at the bottom of this post in the references section.

Compiling these recommendations as well as adding in a few of our favorites (Wolfram Alpha and Paper for me!) below is the final list of chosen apps: 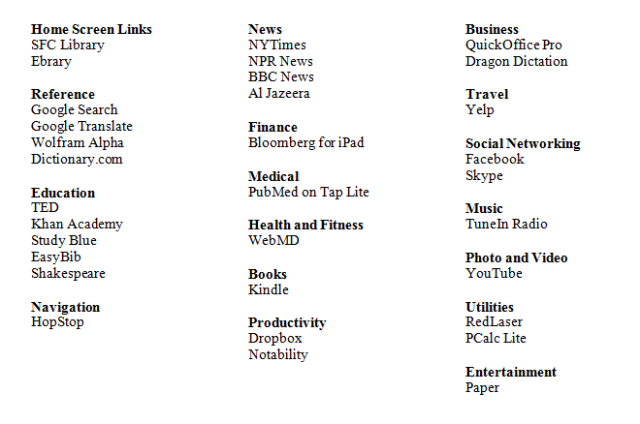 iPads were created as personal devices, and were not built to be shared and loaned, which makes the sharing and loaning of these devices a lot harder to navigate than I or the rest of the library staff had expected. From the get-go Apple’s Configurator was seen as the clear choice for the wiping, re-configuring and deploying of the iPads from within the library, this unfortunately, was where the library and IT had a difference of opinion. The IT department came to the table with a home-cooked plan for the wiping of the iPads, which would have required student workers to accept each app on the iPads individually each time they were reconfigured. After a trip to the Genius Bar and the sharing of some documentation with IT, along with a few meetings it was decided that Configurator would be used to manage the iPads. Surprisingly, however, Configurator proved relatively difficult to get ‘just right.’ Initially reconfigured iPads were wiped of their names and basic settings, which required a five-step process at the beginning of each loan period to select the correct settings. With the help of a former librarian at Princeton, a lot of online documentation and a bunch of hard work from both departments the iPads were finally set-up in a manner that would be easy for workers to deploy and secure for students to borrow.

The configuring of the iPads, including adding apps, was a month-long period where the divide between the IT department and the library affected the workflow of the project. Although, overall, the iPads created a great project for these two separate departments to work on collectively, the added barriers of password protection that barred library staff from adding and removing apps or from changing the iPads’ settings meant that both departments had to be present for changes to be made.

Promoting the iPads and iPad instruction

Promoting of the iPads included bookmarks and flyers as well as conversations with faculty. Faculty have been encouraged to come to the library and have their students borrow iPads to aid in the research and citation work, and there is already one class scheduled to work on citations using Zotero on the iPads in September! In order to explain all of the apps and the process of saving and sharing work using the iPads I created an Libguide that is linked through each iPads’ home screen.

← You are here: Rethinking the Library Map
Introducing: The Illustrated Library →